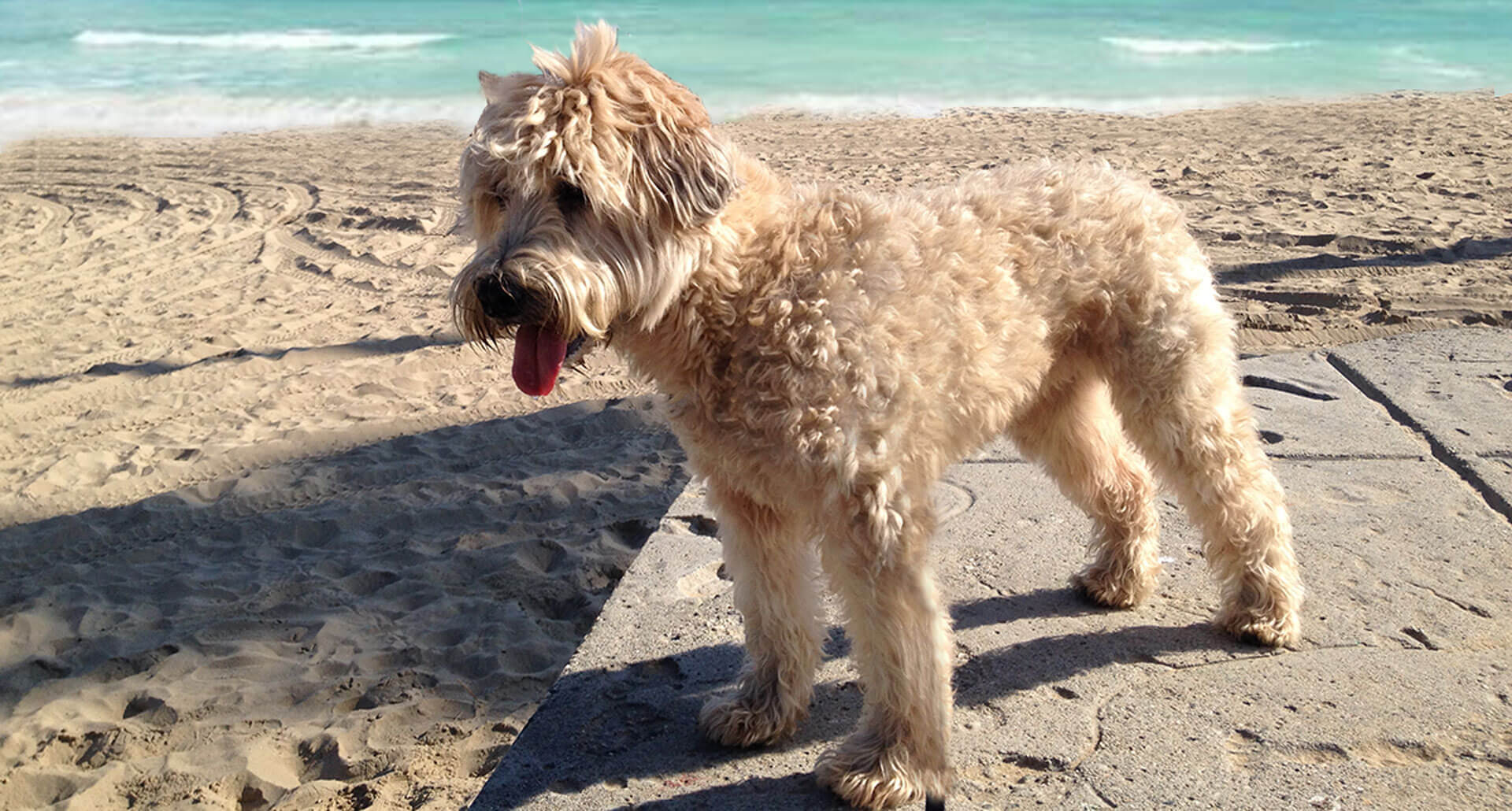 Nerve pain in dogs and neurological damage can affect any part of a dog’s body from their face to their tail. Recognizing nerve damage and disorders is crucial in ensuring there isn’t permanent damage which can often include paralysis.

In Acute Idiopathic Polyradiculoneuritis, the ventral nerve roots and peripheral nerves are primarily affected. It's believed that the immune system is reacting to raccoon saliva, immunization, germs, or another antigen so after a raccoon bite or scrape, clinical indications usually appear 7–14 days later (Coonhound paralysis). Within 1–2 weeks following immunization, dogs might experience a similar condition. In dogs, raw chicken-eating is a risk factor, most likely due to an immunological response to contamination of chicken breast. Clinical signs start out as weakness in the hind limbs which continues to increase over 1-2 days and eventually affects the front limbs as well. These dogs may have a hunched, short-strided gait while walking and feel exhausted immediately after doing anything. After around 2-5 days, the limbs become paralyzed as the symptoms progress. Animals that have been severely affected may be unable to stand, elevate their heads, or move their legs. Muscle tone loss in the legs is frequent, and the muscles may even decrease with time (atrophy). The nerves of the head are occasionally affected which results in reduced blinking and other symptoms including the muscles of the diaphragm being compromised in those severely affected. These canines can't breathe on their own and rely on artificial ventilation to stay alive. Some dogs may scream out if they are in pain or are extremely sensitive to touch. Inflammation of the sensory nerves causes these symptoms. To diagnose, a vet will look at the dog’s medical history and take the clinical signs and examination into consideration along with routine lab tests. They will want to rule out pneumonia due to some of the similar symptoms related to the breathing and aspirating food. They may do a biopsy of the peripheral nerves but spinal nerve biopsies are difficult and rarely done.

Cauda Equina Syndrome is a very painful disease for dogs that is caused by the bottom of the spine calcifying with age, causing the base of the spine to become narrow and compress the nerves which result in severe pain. This can make it very painful for dogs to walk or even just walk their tail. As the disease progresses, the nerves continue to become more compressed to the point in which the dog won’t be able to use its hind legs or go to the bathroom properly. Initially, a dog may start having incontinence but a back problem isn’t always considered the initial culprit as the back pain comes later. Signs to look out for if you suspect your dog to have Cauda Equina Syndrome are difficulty standing, poor coordination and posture, dragging their hind paws, shuffling as they walk, weak rear limbs, trouble urinating, or defecating which may cause incontinence and unable to use stairs. There are actually many causes of this syndrome aside from just age. Those include:

To try and diagnose Cauda Equina Syndrome, a vet will do a neurological exam to observe the dog’s gait for lameness or stiffness. They will also do a physical examination that involves palpation over the spine to try and determine where it is more painful for the dog. They will also try and manipulate the hips and tail to get a pain response that is common in dogs with this syndrome. On top of that, the vet may continue to test the dog’s reflexes, foot placement, and anal tone. Other ways they diagnose is through the use of x-rays and MRIs and/or CTs.

Ehrlichiosis is a tick-borne disease that usually comes from the brown dog tick and seems to be the most severe in German Shepherds and Dobermans and is caused by an organism called Rickettsiae. Signs of Ehrlichiosis for mild, short-term cases include fever, swelling of the lymph nodes, spleen enlargement, decreased platelets in the bloodstream, loss of appetite, swelling in the limbs or scrotum, coughing and difficulty breathing. The signs of long term cases increase in severity, which include spleen enlargement, kidney failure, and lung, eye, brain and spinal cord inflammation. More complications can arise from brain and spinal cord inflammation as the nervous system becomes affected. Signs of this include lack of coordination, depression, increased sensitivity to a usually painless touch and partial paralysis. It’s difficult to diagnose in the early stages, especially if clinical signs aren’t as apparent as it usually takes two to three weeks to respond to the presence of the organism and develop antibodies. To check if your dog has been exposed, your veterinarian can do a screening test in their clinic using a specialized test kit. To assess the degree or species of Ehrlichia infecting your dog, your veterinarian may use ELISA (enzyme-linked immunosorbent assay) or IFA (indirect fluorescent antibody) testing. The results of these tests are sent to outside laboratories for examination. There’s also a newer test, a PCR assay, that’s becoming more widely available that should be considered.

Lumbosacral stenosis (also referred to as sacral stenosis) is a disease that directly affects the structures of the spinal cord in the lumbar and sacral regions of the spine. Lumbosacral stenosis is caused by the narrowing of the spinal canal which then imposes compression on the spinal nerve roots (the nerves that directly exit the spine). This compression can be caused by intervertebral disc herniation, congenital malformation, arthritis, or a spinal tumor. More commonly, this condition is caused by arthritis or an intervertebral disc herniation. Signs of lumbosacral stenosis include pain in the hind end, unable to rise or wag their tail, difficulty rising after sitting or lying down, gnawing on paws or tail, or urinary/fecal incontinence. These signs indicate inflammation of nerves and muscles to the aggravated spinal cord and the affected area. As the disease progresses, the disc located between the last lumbar vertebrae and sacrum may erupt, causing uncoordinated movement or paralysis of the rear legs. X-rays can indicate arthritic changes but diagnosing the condition consists of a myelogram (injection of contrast to highlight any pressure put on the spinal cord) or MRI and CT scans.

The peripheral nerves are located outside the brain and spinal cord and peripheral nerve sheath tumors are comprised of Schwann cells that are found in the cover (myelin) that surrounds and insulates the nerve. The tumors grow on the nerve but don’t spread to other parts of the body. The tumors are firm nodules that attach to the peripheral and central nerve tissue. Signs a dog may have a peripheral nerve sheath tumor include atrophy (muscle weakness), ataxia (lack of muscle control), trouble walking, limb weakness, swelling, overall pain or Horner’s Syndrome. But overall, the actual signs are dependent on the nerve affected. As the tumor grows, the affected area becomes progressively worse as the dog might start with weakness in a leg but may eventually be unable to use that leg. These tumors can even affect the face and head (as to why Horner’s Syndrome is a symptom). If it affects the head and face, they may have trouble chewing due to the facial muscles being affected or trouble blinking. If a vet suspects this, x-rays and lab tests are conducted but even if the tests are normal, it still may be suspected if the symptoms continue to worsen despite medication intervention. They often do a neurological examination as well to determine weakness. A final diagnosis will be made through biopsy of the tumor.

Syringomyelia (SM) is when fluid fills cavities within the spinal cord which is a sign of another underlying disorder, chiari-like malformation (CLM). CLM identifies a flaw in the disproportionate scale of the brain and the excessive space inside the crane. This causes the back of the brain and brainstem to become crowded and the cerebral fluid to bathe the brain and spinal cord is subsequently blocked. This disease is very common among Cavalier King Charles Spaniels but can also be seen in Brussels Griffon, Maltese, Yorkshire Terrier, Chihuahua, and Staffordshire Bull Terrier. Signs that your dog has SM and CLM include withdrawn behavior, crying out when they run, jump, are picked up, and even when defecating due to the increase in pressure in the skull. Other signs are intermittent pain, sensitivity when touched near the ear, shoulder, breastbone, or back of the neck, rubbing their faces incessantly, and scratching at themselves while they are walking, often without any obvious reason. MRIs are the most common way to diagnose SM and CLM as the deformity of CLM can be seen. After and during treatment, owners should do what they can to prevent recurring symptoms and disease progressions such as raising the food and water bowl.